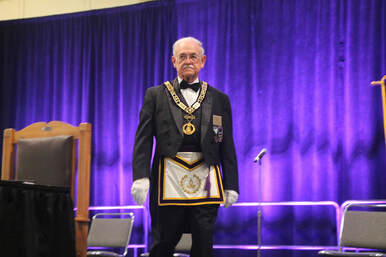 Ronald C Mitchum was born June I, 1944 to the late Clarence J. and Nonnie C. Mitchum of Hollywood, S.C.  Ron attended Dorchester Terrace Elementary School and graduated from Gordon H. Garrett High School in 1962.  He has been married to Susan Brown of Camden, S.C. for fifty-two years.  He and Sue are members of Spring Valley Baptist Church in Northeast Columbia.

Over the years, Ron has served his churches, North Trenholm Baptist and Spring Valley Baptist in several capacities.  While at North Trenholm he served on the Board of Deacons as well as Church Training Director and was a member of the finance committee. He played softball on the church team and coached youth baseball.  After changing his membership to Spring Valley, he has been involved with the Youth Ministry by having fund raisers to help offset some of the cost of their summer mission trips and currently helps preparing meals for the church’s Senior Adult BALL (Be Active Live Longer) Club.

Outside of his church, Ron has been very active in fund raising activities especially if it benefited children.  He along with four others planned and sponsored the Carolina Children’s Home BBQ Cook-off.  He participated in the competition for over ten years. He also participated in several other BBQ cook-offs around South Carolina that benefitted the Shriners Hospital, college scholarships for young people, and multiple sclerosis research. He has also been involved with his Square and Compass Club of the Midlands for the past fifteen years in smoking hams and turkeys at Thanksgiving and Christmas.  This endeavor has allowed the Club to give over $250,000 of which ninety percent of the funds went to 501 (c) 3 children’s charities. Also over the last fifteen years, he and his cooking team provided meals the Sunday before Thanksgiving and Christmas for Navy personnel training at Ft. Jackson prior to being shipped to the Middle East.  For his efforts, in January, 2007, Ron was presented the “Order of the Palmetto” by Senator Joel Lourie and Senator Ted Vick on behalf of Governor Mark Sanford.  The Order of the Palmetto is the highest civilian honor awarded to citizens of S. C.

Ron worked as an internal auditor for twenty-nine years starting with The First National Bank of S.C. and their successor Wachovia Bank.  After the merger of Wachovia and First Union, he was assigned to the Bank’s Analytical Team as a Senior Analyst where he worked until his retirement in August, 2002.

Ron was raised to the Sublime Degree of a Master Mason in Forest Acres Masonic Lodge #410 in Columbia in July, 1980. He served the Lodge as Master on three occasions and as Secretary for a total of ten years.  In 2009, Forest Acres merged with Pacific Lodge #325.  Ron served Pacific as treasurer for a number of years.

Ron was appointed Senior Grand Deacon in 1987, District Deputy Grand Master in 1991, elected Grand Treasurer in 1992.  He was awarded the Frederick Dalcho Medal in 1997 and the Albert Gallatin Medal certificate and medal in 2005. He was elected Junior Grand Warden in 1999, Senior Grand Warden in 2001, Deputy Grand Master in 2003 and Grand Master in 2005. He is a member of the Ancient and Accepted Scottish Rite Bodies where he serves as treasurer of the Columbia Valley. He was invested as a Knight Commander of the Court of Honor in October, 2001 and Coroneted 33 Inspector General Honorary in 2005.  He is a member Jamil Shrine, an associate member of Omar Shrine and honorary member of Hejaz Shrine. He represented Jamil on the Board of Governors of the Shriners Hospital for Children – Greenville from January 1, 2011 until December, 2020. He served as Chairman of the Board during the years 2018 and 2019.  He is currently an Emeritus member of the Board. He is also a member of Moultrie Camp, Charleston Chapter #28 National Sojourners, Inc. and Heroes of ’76. He has been on the Senior Executive Committee of Grand Assembly of S. C. International Order of the Rainbow for Girls. He serves as their treasurer and chief cook at their Grand Assembly and Grand Family Retreat.
At Grand Lodge he has served as the Chairman of the Masonic Relief Committee, on the Finance Committee and as Chairman of the Commission on Investments.